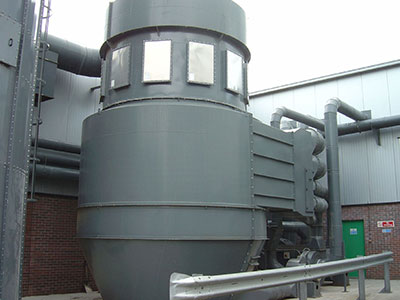 Dustraction has been the waste extraction supplier of choice at SAM Mouldings in Antrim for well over a decade and has helped Europe’s leading manufacturer of architectural mouldings in MDF to win some very significant environmental protection accolades in the battle for the environment.

Most recently, a new 80 m3 storage silo, the fourth on the eight acre site, was installed by Dustraction to take and to store the MDF waste from an existing but relocated cyclo filter. A two way diverter was also installed at the outlet of the cyclo filter to enable the flow of waste to be switched between silo stores three and four to ensure a reliable feed source for the new CHP plant.

Around 2.5 tons of MDF waste is generated per hour at SAM Mouldings and is, with the help of The Carbon Trust, being used to generate electricity, as well as factory process heating.  This has completely eliminated the company’s energy bill that was running at £230,000 per annum.

Dustraction’s longer term role in the enterprise has been continually to upgrade the waste extraction, storage and delivery mechanisms needed to get the now valuable wood waste fuel to the electricity generating turbine via the MDF chippings and dust incinerator.

A second cyclone dust collector filter has also been installed to exhaust waste from a repositioned hogger via a new external network of ducting. 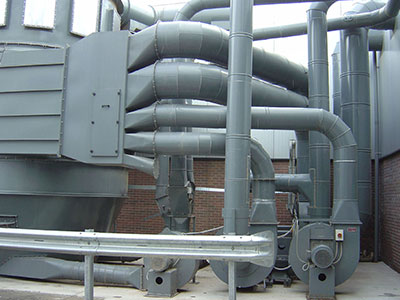 Dustraction’s layout is in support of a biomass wood chip and dust boiler installation with a heat exchanger and steam turbine that was partially funded by an interest free Energy Efficiency loan from the Carbon Trust. It produces, according to factory manager Mark Kirkpatrick, around 7.5 million kW per year and payback will be in a little over two years.

In addition to the elimination of SAM Mouldings’ annual electricity bill of £230,000, the turbine will generate an excess of power for sale back to the national grid for an additional estimated annual income of up to £35,000.

It also completely eliminates a waste disposal bill at SAM of a further £300,000 per annum, making the sustainability element look very attractive indeed. “On top of all that,” says Mark Kirkpatrick, “we close our eyes at night knowing that we are saving about 1,200 tonnes of carbon dioxide being pumped into the atmosphere each year by avoiding the use of fossil fuels.”