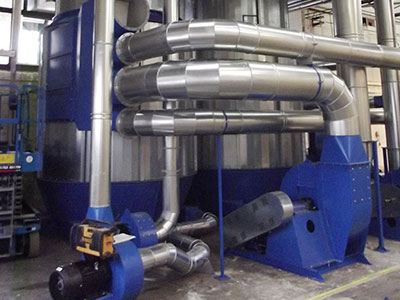 The workshops at Pinewood Studios manufacture in wood and wood-based panels to create film-sets for the movie industry. One of the most important watchwords at Pinewood, whoever you are, is noise because filming is always going on somewhere across the million square feet plot.

Dustraction was tasked with reducing the sounds of dust extraction and disposal. Because of the importance of noise abatement around the film sets, all the new filters and fans are now located indoors and have been partitioned off inside a dedicated new plant room. Systems contain several fans and duct mains, each serving a separate area of the shop floor, in a layout that enables individual areas to be shut down when not in use, making savings in power as well as noise.

Dustraction have been working on impeller noise generated by the traditional paddle-blade style of fan-set and there have been big increases in efficiency as well as lower noise output. Work done by the R&D Dustraction team has resulted in a new generation of ruggedly constructed wood-waste handling fan-sets that retain the self-cleaning characteristics of the old paddle-blade styles, but which can also operate at much higher pressures with increased efficiency as well as lower noise output due to improvements in blade design.

The new cyclo filters are Dustrax 5s which between them handle a total air volume of 11.3m3/sec which represents a spare volume capacity of almost 50% for the future, which Pinewood’s man Jonathan Ash says may be needed sooner rather than later! 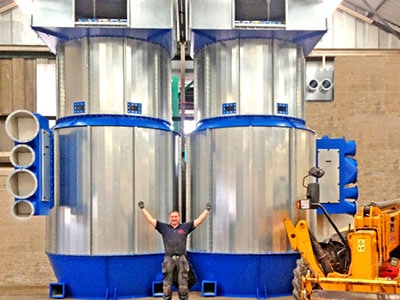 At Pinewood, Dustraction have now installed two new indoor cyclo-filter systems together with a number of fan sets; one cyclo filter handles clean wood and the other plastics and non-recyclables, each plant discharging to externally mounted skips via closed loop cyclones.

The sounds of waste extraction at Pinewood Studios are now housed in a dedicated Plant Room at the back of the Woodworking & Panel Mill where redesigned fan-sets operate at higher pressure and at lower noise output. New ducting by Dustraction is now feeding many more machine stations at Pinewood Studios in Iver Heath in Buckinghamshire.