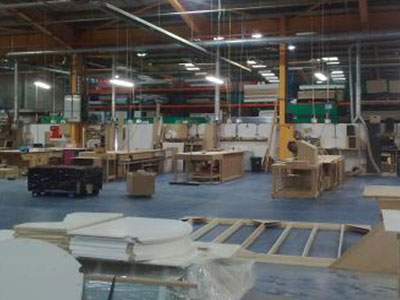 A new dust extraction layout has been installed by Dustraction to serve a wide range of traditional joinery and wood-based panel working machinery on the shop floor of a new factory for premier exhibition and event organisers Melville in Coventry.

The layout is based around a Dustrax No 27 BB Series filter plant to allow for future expansion by adding further filter chambers and bagging base extensions and also by increasing the fan power.

Melville Exhibition & Event Services is one of the UK’s leading suppliers in the sector with offices in Birmingham, London, Manchester, Glasgow and Abu Dhabi from which they provide the full spectrum of support services. These include stand design and build, electrical installations (including theatrical lighting), graphics, logistics, furniture hire, floor coverings, venue services, data and registration and floor planning services.

Many of the world’s best-known exhibitions feature on the operating schedules of Melville including the UK’s largest show – the NEC Spring Fair and also the British International Motor Show, Clothes Show Live and the print, publishing and media trade show IPEX.

Alan Durant, of Melvilles, says that contractors coming into the new factory at the NEC all agree that it’s the nicest, cleanest, happiest – and therefore most productive – working environment they visit. Fine dust is a no-no says Alan; if it’s in the atmosphere it’s a serious fire and health hazard and if it’s on the shop floor it makes it so slippery it becomes dangerous – non-slip coatings notwithstanding. Fine dust underfoot means that shop floor workers are compromised in terms of their performance levels and visiting customers go away unimpressed. 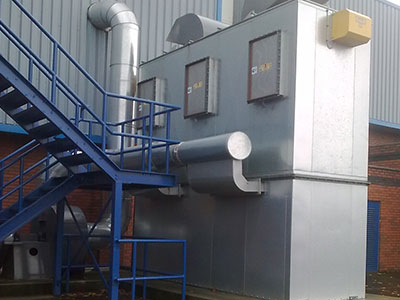 And it’s not just MDF that Melvilles use in the manufacture of their often complex display systems – a lot of solid timber joinery together with chipboard and MFCs are also deployed. It adds up to seven or eight large collection bags of waste with everything double bagged and hermetically sealed to ensure complete capture for effective disposal.

In this working environment, no hand brushes or brooms are used by staff because, in addition to the machines, every bench is also served by hand-held suction cleaners, all serviced by the Dustrax 5xsection No 27 BB modular woodwaste filter.

Because of the explosive nature of the dust, the filter chamber is mounted onto an enclosed bagging hopper to discharge waste directly into the collection bags. Each of these is retained on bagging spigots with quick-release toggle-action sealing strips to ensure quick, easy and clean removal of all harmful waste from the site.

The fully enclosed bagging base has hinged doors for easy access and each also has a sight glass for an accurate visual indication of collection levels.

Steve Matuska at Dustraction says: “Melville is one of those customers everybody wants: they know exactly what they need in terms of a result, they don’t compromise on specification and they insist on the job being right in all aspects and at all times. And they also placed full trust in Dustraction as their own specialist supplier of choice – and everybody does a good job in circumstances like those!”