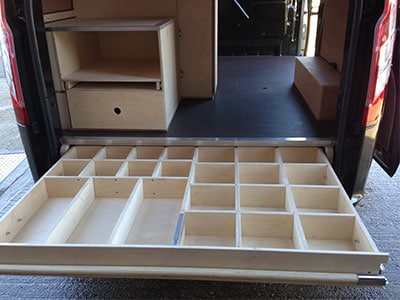 Anglian Vehicle Linings is a dream come true for any white van man. Since 1998, the company has been creating custom-designed and built interiors for small and large vans and over the years, business has grown to an impressive 60-70 vehicle fit-outs per day. “Mainly we supply and fit ply lining kits to commercial vehicles,” Managing Director, David Byatt, told Furniture Journal. “Alongside that we build a lot of plywood racking systems for vans and we fit all the accessories that go with it – tow bars, alarms, roof racks, metal racking, all the accessories people want these days.”

When David took the plunge and decided to move his growing business to a larger factory in Landermere, he was understandably reticent about adding the cost of a sophisticated dust extraction system to his already increased overheads. Who wouldn’t be? But now he has an efficient system, and it’s outside the building where he wanted it, the convenience – not to mention the figures – have turned what he once viewed as a major decision into a no-brainer. “Before we’d had internal two and three bag units,” David explained. “We wanted to get the extraction system outside the building. I spoke to two or three companies but we do work for a company that already uses Dustraction, so I phoned Steve Matuska at Dustraction about a system.”

With two Multicam routers, an older AXYZ machine, a panel saw, a crosscut bench and various other machines working constantly, getting the flow rates right was crucial. “I explained to Steve what we did and which machines would be on the system,” David continued. “He asked me for flow rates that we’d need at the cutter head on the CNCs. I had no idea, so he dealt with Multicam and came back with a layout and specification for a system. Steve did all the groundwork. Dustraction even piped up the chipper unit and the biomass. Dustraction and Wood Waste Technology jointly put everything together for us.” 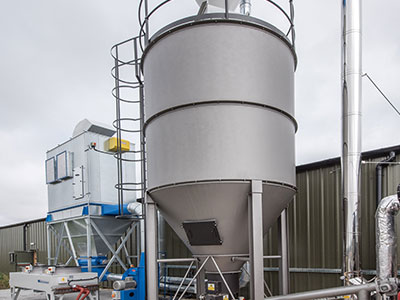 Based on a plan drawing of the factory showing positions for each of the machines, and equipped with information on each that he’d procured from the manufacturers, Steve calculated the system would need to provide a total air volume of 7,560m³ per hour – a volume easily handled by Dustraction’s tubular sock-type Dustrax 27 series filter system. The Dustrax 27 provides 81 square metres of effective cloth filter area with a filtration velocity of 1.55mpm and comes with the added benefit of automatic shaker cleaning that operates when the system is shut down – and explosion panels to ATEX requirements.

The system includes waste transfer into the end of the hopper section via the main floor-mounted extraction fan set, and discharge through a heavy duty rotary valve air seal. The rotary valve, which is driven by its own 1.1kW geared motor, is specifically designed to handle wood waste and has rubber tipped blades to prevent blockage and blade degradation. Steve Matuska’s proposal included mounting of the filter plant on a support structure that raised the rotary valve outlet so it was at a suitable height to discharge the waste into a 1.5m³ bulker bag or a skip. Also included was a WWT storage silo that David reckons should be sufficient for four to five days of burning when the boiler is running at full tilt, and a fully sequenced control panel that ensures smooth operation of the filter plant.

He also opted for a Gross Gaz chipper, fitted with a bullet catcher, that makes short work of the 5.5mm, 9mm and 12mm ply and birch offcuts Anglian Vehicle Linings previously sent to landfill at a cost of around £45,000 a year. The chipper is wired so if the extraction system isn’t on, or if the silo is full, it is isolated, and the whole system has been provided with flexibility to cope with additional machines later, if required.

“It was probably two-and-a-half months from first phone call to installation,” recalled David, admitting that he’d added to the timeframe by making a few changes. “I’d give ten out of ten for the service from Dustraction. Nothing has been too much trouble for them.”