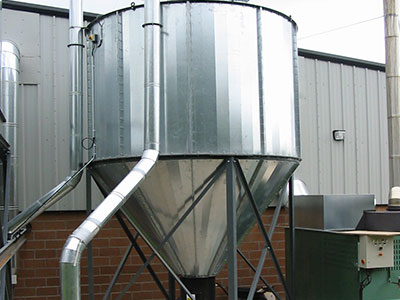 Oakfield Cabinets supply rigid built kitchen cabinets for the local market in Antrim, Northern Ireland, where the housing market burgeoned throughout 2005 and 06. It had dropped back a little in the closing months of 2007, according to MD Francis Dick, and he has decided to make up any shortfall by bespoke building cabinet furniture for shop fitters across the broad Ulster panorama, which has significantly increased his output.

So now he has installed a new wood waste disposal and incineration package from Dustraction. “We are generating around 4 tonnes of dust and solids waste a week,” he says, “and that was costing me around £20,000 each year to dispose of via landfill. But environmental issues have come much more into focus around here lately so we’ve decided to clean up our act with the help of Dustraction. In doing so we have eliminated that disposal cost, we have factory heating that is effectively for free and, for the first time in a long time, our working environment is as clean as a whistle.”

The Dustraction system incorporates a Dustrax 27 RV filter which comprises circular fabric tubes and an automatic shaker mechanism to provide periodic removal of any surplus waste on the filter sleeves. All the waste falls to the base of the hopper and is discharged via a heavy duty rotary valve to a waste transport system and cyclonic separator mounted above a 30 cubic metre silo serving a new WT25A incinerator plant. 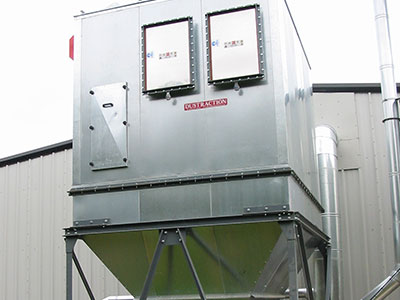 State of the Art Wood Combustion

Dustraction worked with WoodWaste Technology in conjunction with the incineration plant, installing the WT25A automatic unit The new hogger at Oakfield which, according to WWT, is `state of the art wood combustion technology’. The system is set to accommodate factory fluctuations by burning between 7,000 and 10,000 kilos of waste per week and generating a million BTUs.

The equipment has handling technology features in advance of the competition including a screw feeder housed in a dedicated tube which falls short of the fire box to eliminate the need for annual replacement -common with competitive incinerator systems. The system also includes a grit arrestor which has been designed to slow the passage of the grit and to reduce wear within the box section of the filter, which on competitive systems also often means replacement.

The induced draft fan has been re-sited remote from the hottest of the gases in order to cool the impellers and maintain higher standards of balance. Improved balance also promotes durability not common in this type of equipment and makes the whole system run much more quietly – to the significant benefit of the local community!

The balance of dust and solid chipboard panel offcuts in the waste at Oakfield Cabinets also introduced the need for a chipper – a Votecs EZ6/1 unit with a load capacity of 0.6 cubic metres and a special hydraulic ram feed system which was also installed by Dustraction.