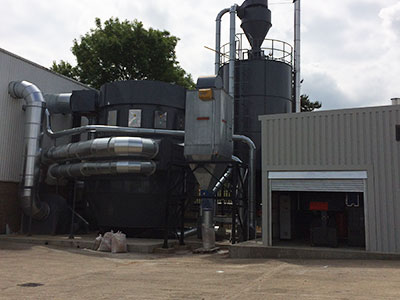 Steve Matuska reports that his nearest customer has moved away from the factory next door, seeking a bigger and better equipped one down in Corby. Steve and AJB Woodworking MD Amarjit Binji go back a long way; Dustraction have supplied all his waste extraction and disposal needs down the years as part of his building solid financial growth and a loyal and efficient workforce.

However, as Amarjit explains: “We needed more space – and we also needed to change our attitude towards wood waste and to start using it properly, instead of burying it in the ground. We needed to reclassify waste as fuel instead of garbage, which we were previously hauling to landfill sites and paying to dump. So now we no longer contribute towards an environmental problem, we make use of it!”

AJB have tripled the size of their factory now to a bit under 50,000 sq.ft. and at the same time reduced the actual area of the machine shop floor by about half with new digitally controlled technology and smaller footprint machines with bigger and broader capabilities.

And Dustraction have replaced AJB’s cyclo filter with their latest model which while still the largest capacity in the range is both physically smaller than their existing unit and generates an even bigger margin of spare capacity for the future.

The new 4×10 cyclo filter is more environmentally efficient with emissions of only 0.2mg/m3, well within the latest Euro-model limits and now sited outside the new factory instead of inside; this move eliminates all the attendant noise problems inside the building, of course. Dustraction are unique among UK dust specialists in manufacturing their own cyclo filters plus all the support elements of today’s new installation hardware. 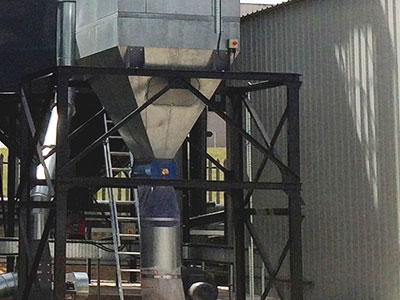 Dustraction have been specialist dust and fume extraction engineers and manufacturers for more than 60 years. “This is all such a relief!” says Amarjit. “We now have a new 980Kw biomass boiler in an out-house alongside our new cyclofilter. This is generating all of our factory heating and hot water needs, so those costs have been eliminated from our manufacturing overhead and our reliance on gas, bottles of which were also kept inside at Oadby because of lack of space, has now been eliminated altogether. We are also now self sufficient for all our waste disposal needs – and boy, does that feel good!” says Amarjit.

Building and construction, he reports, is now the principal source of AJB’s growth and so is the focus of Amarjit’s on-going expansion plans. Window and door sets together with a wide range of architectural mouldings, as well as panel-based fittings, are now the focus going forward and while waste generation has increased significantly to around 15 tonnes per week, Dustraction’s latest cyclo filter feeds the new boiler fully automatically and is easily handling the increase. The new cyclo is physically smaller than AJB’s old one, and is also the same in terms of air pressure at around 47m³/sec (100,000cfm). But it is much more efficient and also now better suited to AJB’s latest environmental needs; and of course, it’s now much quieter inside the new Corby factory, according to Amarjit.

He says: “I have been to Dustraction for all my extraction gear and advice for more than a decade now, ever since we started in business. I have bought not just systems but also bits and pieces of ducting and safety equipment as needed down the years and I have consulted Steve Matuska for technology advice along the way. I’m going to miss not being next door … but I’m taking Dustraction with me to Corby as far as I’m able. “They are only a phone call away – or a mouse click on Dustraction.co.uk. And that makes me feel very much better!”, he concludes.