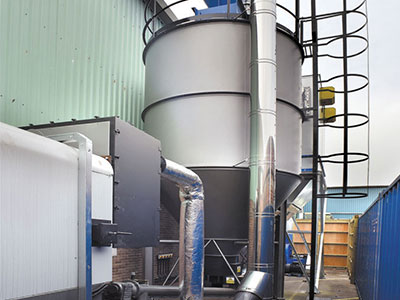 Touch Design Group is well known for the complete interior projects it undertakes. Kitchens, bedrooms with dressing rooms, libraries, bars, staircases – whatever the project, the skilled craftsmen design and make each piece to order using both CNC technology and traditional bench skills.

Much of Touch Design’s work is for prestigious projects in London and when it comes to quality, their high end clients expect the best and don’t compromise.

Unsurprisingly, Directors Ed Tremlett and David Crosby are just as uncompromising when it comes to the equipment and machinery they buy for their workshop. “When we moved to our present site a year and a half ago, we needed to upgrade our dust extraction system so it worked with the new boiler we wanted from WWT,” recalls David. “We had used Dustraction before and their association with WWT meant we could be assured of an integrated fit – exactly what we needed, as the funding we’d secured through WWT was for a complete package. Dustraction is used to working with woodwaste, so we decided to stay with them.”

Dustraction’s quotation included upgrading the existing woodwaste extraction system and Dustrax foursection filter that were there when Touch Design took over the building and replacing it with a new six-section 27RV filter, which would be fed by the existing fan set.

A new fan set would be provided for discharge waste directly into the filter. The total air volume required was based on a 200mm connection at the chipper, operating at 30m/second, and a total air volume of around 4.93 cubic metres per second (10,446cfm). 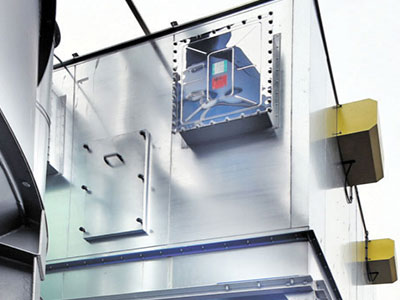 The Dustrax 27RV woodwaste filter utilises a tubular sock-type filtering system with an area of around 162 square metres and automatic shaker cleaning. Waste is transferred into the end of the hopper section via the main, floor-mounted fanset and is discharged through a heavy duty rotary valve airseal, specially designed by Dustraction to handle woodwaste.

The whole filter plant is mounted on a steel support structure that’s been specially designed to raise the rotary valve high enough so waste can be conveyed directly to the silo WWT provided. The dust-laden air enters the filter through the hopper air inlet. Heavier particles are immediately deposited into the hopper while fine particles travel into the airstream and are retained on the internal surfaces of the filter fabric.

The dust falls directly into the hopper on shakedown via the rotary valve and is ducted from the chipper by a direct drive fan set. Extraction ductwork collects waste from the filter and conveys it to a Dustrax cyclone mounted on the silo. An access door has been included below the rotary valve within the conveyor ducting to discharge waste into a container or bulker bag in the event of a burner or silo feed failure and full explosion relief in accordance with ATEX requirements has been built into the filter.

Operation of the entire plant is controlled from a panel that is equipped with contactors, timers and overloads and the finished installation enables Touch Design to comply fully with COSHH requirements. “The hopper feeds the boiler automatically,” says David. “It really works a treat and Dustraction have been fantastic to work with. They were always here when they said they would be and they had the measure of everything. The whole installation went through without any hold ups. We found them very communicative throughout the process. We couldn’t be more pleased.”