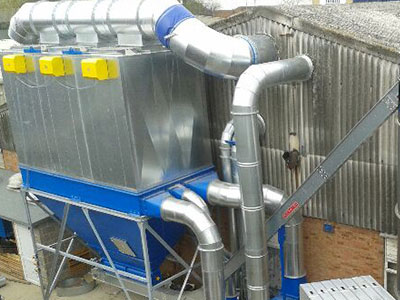 Paul Manchett reckons he’s going to double sales at Handcraft Manufacturing in the next 6 months and is installing new production machinery and wood waste technology accordingly. The latter has been a challenge because he needs all the floor space he can get; there is only a narrow footprint to the rear of his new Wellingborough factory and that is completely inaccessible to vehicles for the installation of filter, fans and ducting and also for an inclined elevator and silo to feed a new wood waste boiler.

Steve Matuska at Dustraction was obliged to drop his new extraction equipment in by crane from the far side of the new factory and to take all the ducting in through the gable end, where the filter and transfer fans leave only inches to spare! Handcraft supplies kitchen, bedroom, bathroom and office furniture either as customer-bespoke cabinetry for end users, with a wide range of fittings and accessories, or as quality carcasing for sole traders, retailers and dealers in the construction industry.

Founder and company director Paul Manchett says that Handcraft uses only high quality 18mm MFC in a wide variety of colours, grains and finishes a far bigger selection, he adds, than is available from competitive sources. Output is currently running at a minimum of 1,200 cabinets a week generating five to eight tons of waste that was previously bagged for disposal to land-fill.

Paul chose a Dustrax 30 RV Series tubular filtering system from Dustraction, complete with three automatic shaker cleaning mechanisms serving 160 filter tubes and a return air system to bring the manufacturing air quality and temperature inside the new factory to optimal seasonal levels. He has been turning work away recently, he says, for want of a better manufacturing set-up and is now planning to double his output over the course of the next six months and all without increase to his workforce “Because we are a bespoke manufacturer,” says Paul, “we have the flexibility to produce our carcasses to any size, with thickness options of 0.4mm or 2mm and with PVC or ABS edge finishing’s. All of my factory waste now goes up the chimney; disposal of flammable waste used to cost us around £120,000 per year and I reckon I’ll see payback on Dustraction’s installation costs inside 15 months.” he adds.

Steve Matuska at Dustraction says that because Handcraft’s new factory site is densely residential in Wellingborough, noise is a major issue. Recent research and development by the Dustraction team at Oadby has resulted in major strides being made in noise reduction; Paul Manchett says: “I had a single fan running before and I’ve now got three, serving many more machine stations, and combined they make less than half the noise.”

The new filter is externally mounted on a narrow strip of concrete to the rear of the new factory with transfer fans and silo for wood-waste storage and burning. The filter plant sits on a steelwork support gantry to raise rotary valve airseal outlets for smooth discharge of waste to an inclined conveyor and storage silo by Wood Waste Technology to feed a new boiler for seasonal air heating, cooling and disposal as needed.