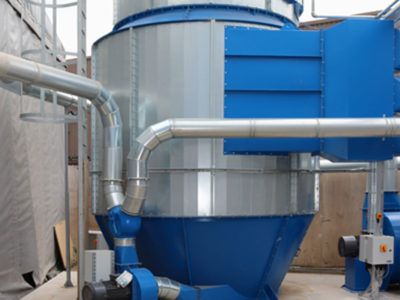 Downtime is costly to any business but when faced with a factory that operates a minimum of 20 hours a day and supplies over 45,000 cut parts for the production of 300 three-piece suites every 24 hours, fitting a brand-new extraction system into DFS’ Lincoln House Woodmill was no mean feat for dust extraction unit specialists, Dustraction.

Installation without Downtime – a Challenge

“To put things into perspective, one hour of downtime in our factory would cost us £10,000,” explains Eddie McDermott, Woodmill Manager at DFS Lincoln House Woodmill. “So, when installing a new dust extraction unit, turning the machines off, or limiting the number of machines in use whilst it was being fitted, was simply not an option for us. We needed to use a company that we could rely on to get the job done quickly and efficiently. For us, this was Dustraction.”

The site has grown significantly in the past few years, with the introduction of several new traditional woodworking machines and CNCs on the factory floor. Working off two separate cyclone dust collector units to accommodate the latest machines, Lincoln House Woodmill’s extraction systems had reached their maximum capacity. And, with a new MZ CNC machine centre ready to be installed into the factory, Dustraction was set the task of creating a new extraction system that would simplify the operation and future-proof the business by offering 30% expansion, without resulting in any downtime.

In order for the team to achieve this, Dustraction built the new extraction system around the existing design and, when it came to fitting the extraction system to the machines, the team worked when the factory was closed. “Dustraction even modified the old system so we could use our new MZ machine centre before our new system was fully up and running,” adds Eddie. “This is why I like working with Dustraction. They really do go the extra mile for their customers and they get the job done with minimal fuss. Where other companies may have been put off by the idea of working late nights and weekends, the Dustraction team put the hours in and the results speak for themselves.”

The system’s reliability was also an important factor for Eddie to consider. “For us, money saving comes from having no break downs. We work to a ‘just in time’ philosophy, so a fault with our extraction system could lead to production grinding to a halt. Customer service is extremely important to DFS and delivering our customers’ orders on time is paramount to the company’s ongoing success. Having used Dustraction before, I have every confidence in the new system and I know the team are on hand if any issues do arise.”

The new Dustrax 4X6 cyclo system, which has been designed specifically for operating on a continuous basis, has streamlined the overall dust extraction process and has allowed for 30% growth if new machines need to be added to the factory floor. Maintenance has also been minimised, reducing ongoing downtime and servicing costs, thanks to very few moving parts and a robust 3mm thick mild steel sheet body. The clever design also extends the life of the filter sleeves and guarantees efficiency levels lower than 0.2 mg/m³, falling in line with existing European Legislation.

Eddie adds, “The new cyclo system fits the brief perfectly and it was installed with minimal disruption to our work. I have every faith in what Dustraction’s team do and the systems they install. They are experts in their field and I wouldn’t hesitate to use them again.”

The relationship is also set to continue, as planning for another extraction upgrade in another site is already in the pipeline. Dustraction is due to start work on the new system in the coming months.